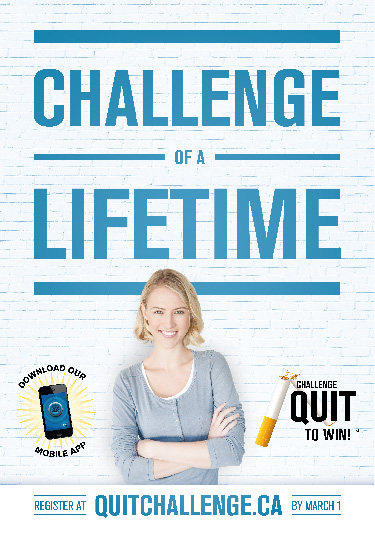 Montreal, January 7, 2014 – The Quit to Win! Challenge is celebrating its 15th anniversary this year. Just in time for New Year’s resolutions, the campaign invites Quebec smokers to take up the challenge of a lifetime: to quit smoking for at least 6 weeks, from March 1 to April 11. Registrations will take place on quitchallenge.ca up to March 1st.

A proven method, the Quit to Win! Challenge is, among the initiatives of this kind, one of the ones that reaches the greatest number of adult smokers in the province. In the past 15 years, over 360,000 people of all ages have taken part in it. On average, 2 out of 3 participants succeed at meeting the challenge of not smoking during the 6 weeks of the campaign. One year after quitting, 20% of them are still non-smokers, a success rate that is substantially higher than that of people who quit smoking without using an assistance method (between 3 and 5%). In a province where over 1.6 million people smoke, of whom 60% wish to quit, the Quit to Win! Challenge still has its place.

“For the past 15 years, the Challenge has counted on motivation and mutual assistance to support and encourage smokers. Quitting smoking is not easy, and we are there to remind people that it is possible and that they can be motivated! Self-knowledge, a good support network and the right tools are the keys to success,” explains Dr. Roxane Néron, spokesperson for the Challenge. “And when one knows all of the health benefits it entails, why not take advantage of the free support offered by the Challenge and take action?”

For its 15th anniversary, the Quit to Win! Challenge recently launched an all-new advertising campaign with a tagline – The Challenge of a lifetime – that invites smokers to overcome their dependency by quitting smoking with support and a touch of pride!

Tobacco use leads to strong psychological and physical dependency, which accounts for the difficulty many smokers have in butting out. On average, smokers have to make 4 attempts before succeeding in quitting for good.

And this year, participants will stand a chance of winning one of numerous prizes, including, for the 15th anniversary of the Challenge, one of 2 trips to the sun destinations of Puerto Plata and Cancun, courtesy of Transat Holidays and Iberostar!

“When I quit smoking, keeping my mind busy was my priority in order to succeed in breaking my habit and changing my routine! So I got into the habit of visiting the Challenge website and I began to put some of the advice into practice. It worked!” says Véronique Porlier, spokesperson and participant in the 2012 Challenge. “With all the support offered, you really can succeed. Believe me!”

At any time, participants can visit the quitchallenge.ca website, which includes a Forum, a Wall of Tips and the Challenge Album, as well as the campaign Facebook page (in French) (facebook.com/defitabac and its community. They can also call upon the services of the iQuitnow helpline (1 866 527-7383) and the Quit Smoking Centres, tools that are available all year long.

The 15th Quit to Win! Challenge will take place from March 1 to April 11, 2014. Registration at quitchallenge.ca.

The 15 years of the Quit to Win! Challenge in numbers

About the Quit to Win! Challenge

The Quit to Win! Challenge is a campaign that provides free support to smokers who want to quit smoking. Inspired by the World Health Organization’s Quit & Win international challenge that originated in Finland, it was created in 2000 by the Capsana team, then known under the name of ACTI-MENU, in partnership with Quebec's ministère de la Santé et des Services sociaux and the Direction de santé publique of the Agence de la santé et des services sociaux de Montréal. Since its creation, over 360,000 people of all ages have taken part in it.

Capsana is a social enterprise owned by the Hôpital Maisonneuve-Rosemont Foundation, the ÉPIC Foundation and the Fondation PSI, and associated with the Montreal Heart Institute. Its mission is to help individuals take an active role in their health. Founded in 1988 under the name ACTI-MENU, Capsana is dedicated exclusively to the promotion of health and healthy lifestyles, as well as the prevention and management of chronic diseases.

Capsana is behind well-known social campaigns such as the 5/30 Health and Wellness Challenge, the Quit to Win! Challenge, and Smoke-Free Family, which are geared towards the general public, municipalities and families. It also implements health-promotion programs in the workplace and produces publications and other patient information tools for the clinical setting. The organization obtained the Healthy Enterprise – Elite certification from the Bureau de normalisation du Québec (Quebec Standards Bureau). For more information, visit www.capsana.ca.