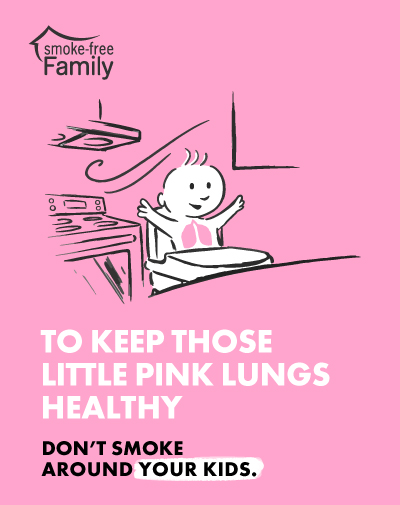 Second-hand cigarette smoke is bad for everyone, but it's especially harmful to babies and children because they breathe more quickly than adults and their immune systems and lungs are still developing. According to a Léger survey (2021), 41% of parents who smoke don’t consider that regular exposure to second-hand smoke increases the risk of children developing the following five health problems: asthma, pneumonia, sudden infant death syndrome, colds, and ear infections.

This troubling statistic warrants another initiative by Capsana: Smoke-Free Family, a public awareness campaign launched in 2007, about the health dangers of second-hand smoke, particularly for children.

A call to action

The campaign invites parents and future parents to take a positive step to protect their children's health (even during pregnancy) by making their home and car smoke-free zones. Even when outside, in a park or while walking, second-hand smoke, Smoke-Free Family reminds that around children and pregnant women, we don't smoke.

To keep those little pink lungs healthy, don't smoke around your kids.

Smoke-Free Family is supported by a multiplatform promotional and media strategy that aims to educate families about the toxic effects of second-hand smoke. The campaign is presented in partnership with a network of public and private organizations, including Quebec's Directions régionales de santé publique, which distribute our promotional material.

Nearly 85% of second-hand smoke is invisible, but toxic

When parents are smokers, the risk of their children becoming smokers as well is higher

Second-hand smoke contains more than 7,000 chemical substances, of which at least 69 can cause cancer

Two-thirds of a cigarette’s smoke escapes into the environment