Children’s exposure to second-hand smoke: Still some myths to dispel 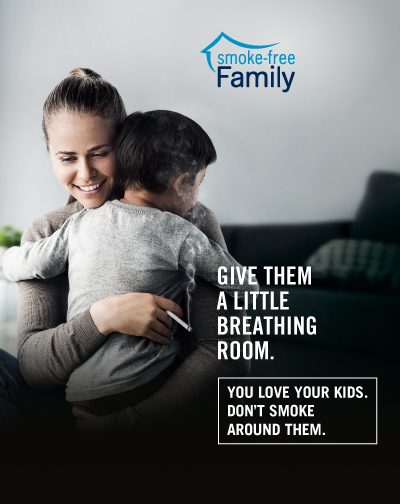 Montreal, August 26, 2019 – Since several myths still persist, Smoke-Free Family reminds parents of the importance of taking concrete actions to protect their children from the dangers of second-hand smoke. This begins with two golden rules: making the home and car smoke-free zones and smoking far from kids outside. To help parents take action and change their habits, the campaign provides information, useful tips and advice as well as resources to help those who want to quit.

Persistent myths
The harmful effects of second-hand smoke are well documented and are becoming widely known. What is not as obvious, and encourages the perseverance of myths, is the ineffectiveness of mitigating measures. One of these myths is particularly stubborn: according to a Léger survey (2018), among parents who smoke in the house when children are present, 63% of them smoke under a range hood or near a window.¹ Even if this effort is often filled with good intentions, there is no way to completely eliminate the toxic substances that emanate from cigarettes and are released into the ambient air. The only way to protect children’s health remains smoking outside and far from them!

Extremely harmful smoke
Second-hand smoke contains more than 7,000 chemical substances and is toxic to the health of children and babies. Since they breathe more quickly and their immune system is not yet fully developed, they are more likely to be afflicted by multiple health problems when exposed to this toxic smoke, including asthma, pneumonias, colds, and ear infections. Not to mention that they are also more likely to fall victim to sudden infant death syndrome. Yet, in 80% of the households surveyed, at least one person smokes in the presence of children, whether at home, in the car or outside.¹ Hence the importance of continuing to raise awareness about the harmful effects of second-hand smoke, which still do not seem to be taken seriously enough by parents.

An opportunity to quit
Good news: the Smoke-Free Family campaign motivates more than 3 out of 4 parents who smoke to change their habits regarding their tobacco consumption. Of this number, over 45% would like to reduce the number of cigarettes smoked and 31% see an opportunity to quit completely, out of love for their family.¹ This is why the smokefreefamily.ca website provides free support resources for quitting smoking and directs smokers to the iQuitnow helpline (1-866-527-7383).

About Smoke-Free Family
Smoke-Free Family is an initiative of Capsana presented in collaboration with a network of public and private organizations, including Quebec’s Ministère de la Santé et des Services sociaux, the Quebec Directions régionales de santé publique, and the Jean Coutu Group. To find out more, visit smokefreefamily.ca.

About Capsana
Capsana is a social enterprise owned by the ÉPIC Foundation, which is associated with the Montreal Heart Institute, and the Fondation PSI. Its mission is to help individuals take an active role in their health. To find out more, visit capsana.ca.