With the Quit to Win! Challenge, you can stop smoking.

A new campaign for the 20th anniversary of the Challenge 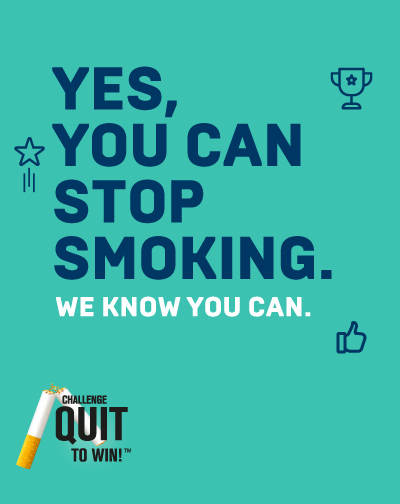 Montreal, January 2, 2019 – The Quit to Win! Challenge is back with a new promotional concept for its 20th anniversary. Not to be missed, the Challenge is an annual province-wide campaign that helps Quebecers break free from tobacco. Participants commit to not smoking for 6 weeks, from February 4 to March 17, 2019, which is a realistic and meaningful first goal, considering that 6 weeks without smoking means 6 times the chances of quitting for good! Register today at quitchallenge.ca.

A powerful, inspiring new concept
The statement at the core of the new advertising campaign—“Yes, you can stop smoking. We know you can”—reminds smokers that they have the power to break free from this addiction and that the Challenge is there to help them. For 20 years, the Challenge has been the strongest supporter of future ex-smokers by offering them support and motivation. In 2018, 45% of participants surveyed said they’d already tried quitting at least four times. That’s why the Challenge continues to encourage smokers to keep trying to butt out and seek help, because the next attempt just might be their last.

The Challenge: still going strong after 20 years!
The Challenge is based on a proven approach: on average, 75% of participants manage to go 6 weeks without smoking! “The Challenge still works, even after 20 years. There are 1.3 million smokers in Quebec, and nearly 60% of them want to be done with tobacco! Since 2000, more than 450,000 Quebecers have participated in the Challenge, which shows people appreciate its positive and motivating approach”, said Danielle McCann, Minister of Health and Social Services.

Support equals success
To increase their chances of successfully completing the Challenge, participants have access to many free support tools, such as a personal online profile at quitchallenge.ca, the SOS Challenge mobile app, encouragement emails, a Facebook community, and the I QUIT NOW services, including the helpline at 1-866-JARRETE (1-866-527-7383). “Quitting smoking is hard and often takes several tries, hence the importance of learning from past experiences, figuring out what motivates you and, of course, taking advantage of the help offered. With the Challenge, you can stop smoking!” stated Dr. Christiane Laberge, the campaign’s spokesperson.

Participants could also win one of two trips to Jamaica, courtesy of Transat and the Meliá Braco Village Jamaica resort.

Targeted campaign for young smokers
Again this year, a campaign will specifically target young adults between the ages of 18 and 24, many of whom are smokers. The campaign highlights the concrete benefits of quitting: saving money, improving their appearance and fitness, and not missing out. Participants could also win a $1,000 scholarship. Register now at quittowinthis.ca.

About the Quit to Win! Challenge
The Quit to Win! Challenge is a province-wide campaign that provides free support to smokers who want to quit through a collective challenge. Created in 2000 by Capsana, the Challenge is carried out in partnership with several public and private organizations, including the Ministère de la Santé et des Services sociaux, Quebec’s Directions régionales de santé publique, the Canadian Cancer Society and the Jean Coutu Group. To find out more, visit quitchallenge.ca.

About Capsana
Capsana is a social enterprise owned by the ÉPIC Foundation, which is associated with the Montreal Heart Institute, and the Fondation PSI. Its mission is to help individuals take an active role in their health. To find out more, visit capsana.ca.