The dangers of second-hand smoke are well-known today. Let’s take action to protect our children! 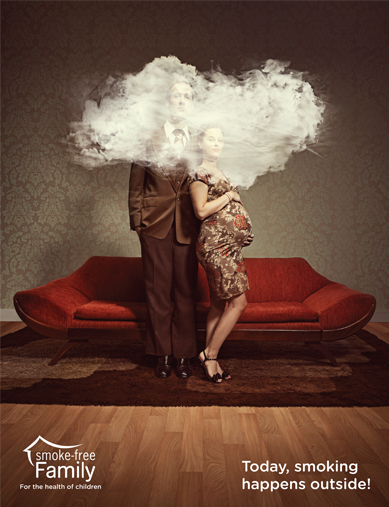 Montreal, November 4, 2013 – In Quebec, 70,000 children under the age of 12 are still regularly exposed to second-hand smoke at home or in the car. An unacceptable situation, because the dangers of this toxic smoke to the health of children, little known a few decades ago, are today clearly proven.

In order to raise the awareness of parents about the harmful effects of second-hand smoke, the Smoke-Free Family campaign is back for a 7th year. It aims at changing the social norm regarding the exposure of children to this smoke by reminding people of the importance of going outside to smoke in order to protect them.

A campaign that remains relevant

Year after year, Quebec places last in the country with respect to the protection of children against second-hand smoke. The most recent studies indicate that twice as many young Quebecers are exposed to it as other Canadians of the same age. These statistics are undoubtedly related to the fact that people smoke or still allow tobacco use in 20% of Quebec homes which include children.

A greater danger for children

Children and babies breathe more quickly than adults, and their immune systems are not yet fully developed. This is why they are at greater risk of suffering from health problems if they are regularly exposed to second-hand smoke.

“In my practice, I have been able to observe the harmful effects of this smoke on the health of children. Asthma, respiratory disorders, repeated ear infections… this is how regular exposure to this harmful smoke can affect little ones,” explains Dr. Catherine Hervouet-Zeiber, pediatrician at the Centre hospitalier universitaire Sainte-Justine and Smoke-Free Family spokesperson.

Even in their mother’s womb, babies are not protected. In particular, second-hand smoke can affect the development of their heart and lungs and increase the risks of miscarriage and complications at birth. Moreover, over the course of the first months of their lives, babies who are exposed to it run a greater risk of falling victim to sudden infant death syndrome.

“It is well-known that smokers do several things in order to not bother their loved ones with their cigarette smoke. Whether by smoking under the kitchen hood or rolling down the car window, their gestures are always filled with good intentions. However, there is no way to ventilate sufficiently to eliminate from the air the toxic elements found in second-hand smoke. The one and only way to protect the health of children is to go outside to smoke and to insist that our visitors do the same,” concludes Dr. Hervouet-Zeiber.

Smoke-Free Family is an initiative of Capsana, a social enterprise dedicated to the promotion of health and healthy lifestyles, as well as the prevention and management of chronic diseases. The campaign is presented in partnership with several public and private organizations, including Quebec’s ministère de la Santé et des Services sociaux, the public health departments of the agences de santé et des services sociaux du Québec, McNeil Consumer Healthcare and Uniprix. To learn more about the campaign and to obtain advice, visit the smokefreefamily.ca website or the facebook.com/smokefreefamily page (in French).