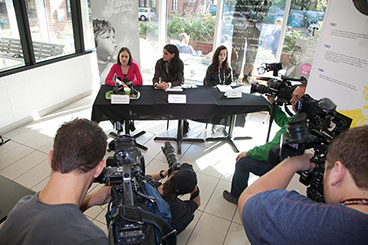 Montreal, October 20, 2012 – Because their parents smoke or allow others to smoke in the house or car, over 89,000 Quebec children (nearly one out of ten) are still regularly exposed to second-hand smoke. The 6th Smoke-Free Family campaign was launched this morning in order to make parents aware of the dangers of second-hand smoke to the health of children. It has been proven: children living in an environment where people smoke have a greater risk of suffering from certain health problems and are more likely to get asthma or other chronic respiratory diseases and ear infections. As babies, they even run a greater risk of falling victim to sudden infant death syndrome.

With its signature “For the health of children, thank you for smoking outside”, the Smoke-Free Family campaign reminds parents and future parents that the simplest and most effective strategy for protecting children from second-hand smoke is to go outside to smoke.

Quebec is the worst Canadian province with respect to the exposure of young people between the ages of 0 and 11 to second-hand smoke in the home. In Quebec, 9% of children in this age group are regularly exposed to it, which corresponds to more than double the Canadian average (4%). Quebec families also appear to be more permissive than Canadian families about tobacco use in the home: only 43% forbid it in Quebec, whereas the average in Canada is 64%.

Second-hand smoke is dangerous for the health of everyone, but babies and children are more sensitive to it than adults because they breathe more quickly and their immune systems are not yet fully developed. The dangers for children are numerous and real: asthma, bronchitis, colds, repeated ear infections, etc. Dr. Catherine Hervouet-Zeiber, pediatrician at the Centre hospitalier universitaire Sainte-Justine, explains: “Children breathe more quickly than adults. If they find themselves in an environment where people smoke, they will inhale more toxic substances. The lungs of young children, which are not yet fully developed, are especially vulnerable to the effects of these toxins. We see a lot of children who have respiratory problems that are exacerbated by second-hand smoke. These children are often more difficult to treat than those who are not exposed to cigarette smoke.”

“And even before their birth, babies can be affected by it,” explains Dr. Roxane Néron, general practitioner and spokesperson for the Smoke-Free Family program. “Second-hand smoke can pass through the placenta of a pregnant woman and threaten her baby’s health. For example, nicotine can harm the development of the heart, lungs, nervous system and digestive system of the unborn baby. We also know that an infant exposed to second-hand smoke has a higher risk of being born with a low-birth weight and of falling victim to sudden infant death syndrome.”

“We notice that smokers often make efforts to not inconvenience those around them. They will smoke under the kitchen hood, near a patio door or in a closed room. Although these gestures are well intentioned, they do not reduce the danger to health. In reality, no ventilation system is powerful enough to eliminate the toxic components of second-hand smoke in a house. The only effective strategy to protect children is for all smokers to smoke outside. It is at home that babies and young ones are the most exposed to second-hand smoke. They are not always able to complain to their family members about second-hand smoke, and are even less able to leave the places where adults smoke, such as the kitchen, living room or car,” concludes Dr. Néron.

What is second-hand smoke?

About the Smoke-Free Family program

The Smoke-Free Family program is an initiative of ACTI-MENU, presented in partnership with several public and private organizations, namely the Quebec ministère de la Santé et des Services sociaux, Quebec’s directions de santé publique of the agences de santé et des services sociaux, McNeil Consumer Healthcare, Uniprix and the Canadian Cancer Society. For more information about the campaign and to obtain advice, visit the smokefreefamily.ca website or the facebook.com/famillesansfumee page (in French only).

ACTI-MENU is a social enterprise owned by foundations linked to the Montreal Heart Institute, the Centre ÉPIC and the Hôpital Maisonneuve-Rosemont. It is dedicated to the promotion of health and the prevention of illnesses. The initiator of well-known general public programs such as the 5/30 Health and Wellness Challenge, the Quit to Win! Challenge and Smoke-Free Family, ACTI-MENU’s team of specialists also implements health promotion programs in the workplace and produces publications containing information for health care network patients in clinical settings. For more information, visit actimenu.ca.