Around children, we don’t smoke 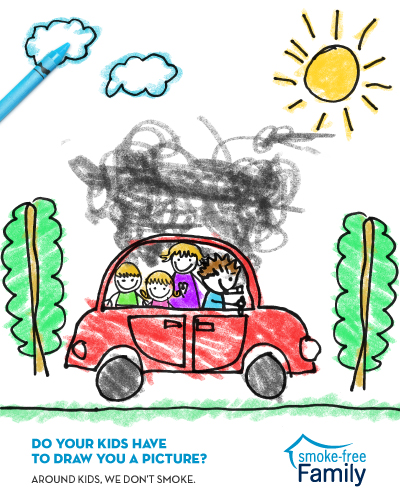 Montréal, May 25, 2016 – To coincide with the enactment of a series of measures related to the Tobacco Control Act, Smoke-Free Family is back with a new ad campaign primarily focused on the dangers of children’s exposure to second-hand smoke in cars and playgrounds. Note that the measures of the Act coming into effect tomorrow focus on prohibiting smoking in a vehicle when a child under 16 is present, as well as in outdoor children’s play areas, playgrounds, recreational camps and on sports fields.

The minister for Rehabilitation, Youth Protection, Public Health and Healthy Living and minister responsible for the Montérégie region, Ms. Lucie Charlebois, shared the following: “It is with great pleasure that I offer my support to the Smoke-Free Family campaign. The Act to bolster tobacco control, unanimously adopted last fall, allowed us to take a giant step forward by better protecting children from second-hand smoke that is harmful to their health. We can be proud of this progress and of this Act, which places Quebec among the global leaders in this matter.”

Dr. Christiane Laberge, spokesperson for Smoke-Free Family, notes that to safeguard children’s health, it is essential to avoid exposing them to second-hand smoke at all times. “The home should be a smoke-free zone, as should cars, where smoke can be particularly dangerous. The concentration of second-hand smoke particles in a vehicle can be up to 27 times higher than in a smoker’s home, and 60 times higher than in a non-smoker’s home1. Even with the windows down, the concentrations are unacceptable!” Dr. Laberge adds that even when smoking outside, in a park or while walking, second-hand smoke, even though it is less concentrated, can also pose a risk to children’s health if they are near the smoker.

The 2016 campaign signature is clear and underlines the fact that with all the known harmful effects of second-hand smoke on health, particularly on children’s health, it is unacceptable to smoke around them. Indeed, this toxic smoke contains over 7,000 chemical products including 70 that are known to cause cancer. Since children and babies breathe more quickly than adults and their immune system is not yet fully developed, they are even more at risk of suffering health problems when regularly exposed to second-hand smoke. Concretely, these health problems refer to bronchitis, pneumonia, asthma and recurrent ear infections. It is thus imperative that parents take concrete steps to protect the health of their little ones: make the home and their vehicle smoke-free zones and smoke far away from them at all times, even outside.

Smoke-Free Family is an initiative of Capsana presented in collaboration with a network of public and private organizations, including Quebec’s Ministère de la Santé et des Services sociaux, the Quebec Directions de santé publique and Johnson & Johnson, with the support of the Canadian Cancer Society, Uniprix and CAA-Québec. To learn more about the campaign, visit smokefreefamily.ca.