More than 60,000 fewer smokers in Quebec with the Quit to Win! Challenge

The Challenge offers a unique approach, free support, prizes to be won and maximum motivation! 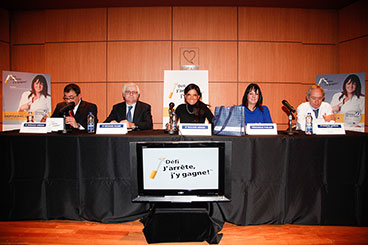 Montreal, January 8, 2013 – This morning ACTI-MENU launched the 14th Quit to Win! Challenge, a smoking cessation campaign that each year invites smokers who want to quit to take action. By registering, participants commit to not smoke for at least 6 weeks, from March 1 to April 11.

In Quebec, there are still 1.5 million smokers, more than one in five people. All are invited to register as of now for the 2013 Challenge at quitchallenge.ca.

A popular and effective campaign

Since its creation in 2000, on average 2 out of 3 participants have successfully met the challenge of not smoking for the 6 weeks of the campaign. The effectiveness of the Challenge was confirmed by a recent study by Montreal’s Direction de santé publique. Nearly 20% of the adult participants remained non-smokers a year after quitting, which is much higher than the abstinence rate of individuals who quit smoking without having recourse to an assistance method (3 to 5%). It is therefore estimated that over 60,000 Quebecers have become non-smokers by participating in the Challenge in the past. That’s as many people as 3 times the Bell Centre capacity during a hockey game!

“Sixty percent of the smokers in the province want to quit smoking. That’s more than half of the smokers! So it is important to continue our actions and to offer them the accompaniment they need in order to succeed,” says Dr. Roxane Néron, the medical spokesperson for the Challenge. “The Challenge is a credible resource to help smokers who want to butt out. It is indeed remarkable to see the number of smokers the campaign reaches!”

The Quit to Win! Challenge is one of the initiatives that reaches the greatest number of adult smokers in the province. Since its creation, 340,000 people of all ages have participated in it.

A formula adapted to their needs

“Tobacco use creates a strong psychological and physical dependency in smokers. People may often think, mistakenly, that it is easy to quit. But to the contrary, smokers who make the decision to quit sometimes have to make a few attempts before butting out for good,” explains Dr. Martin Juneau, cardiologist, director of prevention at the Montreal Heart Institute and co-president of ACTI-MENU. In order to increase their chances of success, the Challenge offers participants a flexible formula that is adapted to their needs. They can register alone, with a non-smoking sponsor or with another smoker who also wants to quit. They have access to numerous free support tools, including, exclusively for participants, the Participant’s file, the I’m Butting Out! encouragement e-mails and the Jean Coutu to the Rescue Support Kit.

Challenge participants may also choose to make use of a pharmacological treatment or of one of the national smoking cessation services, such as the Ligne j’Arrête helpline (1 866 527-7383) and the Quit Smoking Centres. The quitchallenge.ca website and the Challenge Facebook page (facebook.com/defitabac, in French only) also invite participants to seek information about their approach and to encourage one another. Moreover, by taking up the Challenge, they have a chance of winning one of numerous prizes, including a trip to Punta Cana, courtesy of Transat Holidays and Iberostar!

Véronique Porlier, a former smoker and participant in the 2012 Challenge, confirms that the Challenge helped her in her cessation process: “Last year, I chose to register for the Challenge to make my engagement official not only to myself, but also to my loved ones and the other participants! It wasn’t always easy, but when reading the testimonials of the other participants, I felt like I was never alone. I am proud to say that I have just celebrated my first smoke-free year!”

A Challenge full of health benefits

Dr. Juneau invites all smokers to try to quit, no matter how old they are or how many years they have been smokers. “Quitting smoking is the most worthwhile and significant action smokers can take for their health,” he explains. “Smokers’ risk of suffering from a cardiovascular disease is around 2 times higher than non-smokers, to say nothing of the risk of developing pulmonary diseases and multiple cancers. As soon as they stop smoking, their risk of suffering from a cardiovascular disease begins to diminish. So don’t hesitate to have recourse to a such a renowned resource as the Quit to Win! Challenge.”

The Quit to Win! Challenge will take place from March 1 to April 11, 2013. Registration at quitchallenge.ca.

About the Quit to Win! Challenge

ACTI‐MENU is a social company owned by foundations linked to the Montreal Heart Institute, the Centre ÉPIC and the Hôpital Maisonneuve‐Rosemont with the mission to help individuals take an active role in their health. Founded in 1988, ACTI-MENU is dedicated exclusively to promoting health and healthy lifestyles, as well as the prevention and management of chronic illnesses. ACTI-MENU initiates well-known programs geared towards the general public, municipalities and families such as the 5/30 Health and Wellness Challenge, the Quit to Win! Challenge and Smoke‐Free Family. ACTI-MENU is also present in the workplace, where it implements health promotion programs, and produces tools designed for clinical settings, such as information publications for patients. For more information, visit actimenu.ca.