Quebec ranks last in Canada when it comes to the protection of children from second-hand smoke!

Dr. Christiane Laberge is the new spokesperson for the Smoke-Free Family campaign 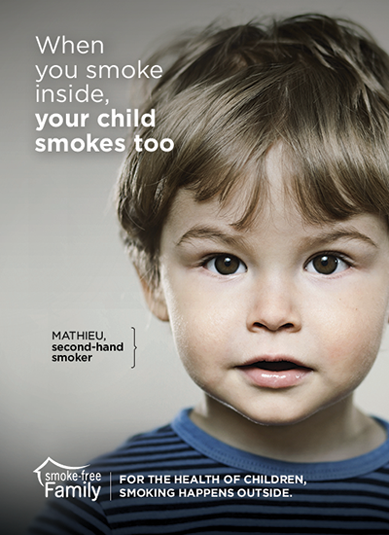 Montreal, October 21, 2015 – For the ninth consecutive year, the Smoke-Free Family campaign invites Quebecers to make their homes and cars smoke-free to protect children’s health. This year, the campaign can count on the support of a new spokesperson: Dr. Christiane Laberge.

Smoking outside, far away from the kids

The province ranks last in Canada when it comes to safeguarding children from second-hand smoke. According to several studies, twice as many Quebecers under the age of 12 are exposed to second-hand smoke than other Canadian children of the same age. Moreover, exposure to second-hand smoke mainly happens at home. It is important to note that smokers generally go to great lengths (such as smoking under an exhaust fan, near an open window, or in a closed room) not to bother those around them. Their intentions may be good, but their actions do not really make second-hand smoke any less harmful to the health of others. “You have to understand that there is no effective method to clear the air of the substances found in smoke. The only way to protect children’s health is to smoke far away from them, and never in your home or car!” says Dr. Christiane Laberge. She stresses the importance of smoking far from the kids “because even outside, like at the park, on the balcony, or while walking, second hand smoke can be harmful to children if they are close to the person who is smoking.”

For children, exposure to second-hand smoke can cause or exacerbate certain health problems, such as ear infections, asthma, colds, and pneumonia. Young babies who are exposed to second-hand smoke are at greater risk of falling victim to sudden infant death syndrome (SIDS).

Why? “Children breathe more quickly than adults and their immune system is not yet fully developed. They are therefore more vulnerable and at higher risk of developing these health problems if they are regularly exposed to second-hand smoke,” explains Dr. Laberge.

Children and young babies are not the only ones affected by second-hand smoke; unborn babies are also at risk. Frequent exposure during pregnancy can stunt their growth and development. Also, pregnant women have a greater chance of having miscarriages, premature births, or complications during birth.

3 KEY STRATEGIES FOR A SMOKE-FREE FAMILY

Smoke-Free Family is an initiative of Capsana, a social enterprise dedicated exclusively to the promotion of health and healthy lifestyles, as well as the prevention and management of chronic diseases. This campaign is presented in collaboration with a network of public and private organizations, including Quebec’s Ministère de la Santé et des Services sociaux, the Quebec Directions de santé publique, McNeil Consumer Healthcare, and Uniprix. To learn more about the campaign and get advice, visit smokefreefamily.ca or facebook.com/smokefreefamily.