Still too many children are exposed to second-hand smoke

Smoke-Free Family is back to raise awareness among parents 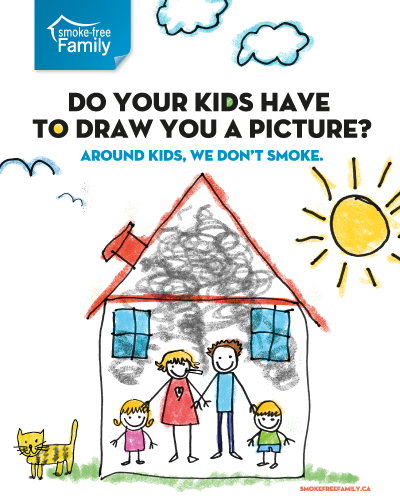 Montréal, September 6, 2017 – The Smoke-Free Family campaign is back from September 6 to October 8, 2017, to raise awareness among Quebec parents about the dangers of second-hand smoke to children’s health. Despite the clearly proven harmful effects of this toxic smoke, a Léger survey of parents who smoke shows that still 24% of them smoke regularly or occasionally in the house with children present, and 17% in the car.1 Obviously, there is still work to be done to raise awareness!

The objective of Smoke-Free Family is to encourage parents to not smoke around children and pregnant women, inside as well as outside. The smokefreefamily.ca website provides information and support to help parents change their behaviours.

It is important to mention that the campaign also supports the Ministère de la Santé et des Services sociaux in the application of the new measures of the act that prohibits smoking in a vehicle with children under 16 present and in outdoor children’s play areas. “The fight against smoking is a priority for our government. With the passage in November 2015 of Bill no 44, An Act to bolster tobacco control, we are working toward our objective of reducing the smoking rate in Quebec, so we can look forward to a tobacco-free future for the coming generations,” shares Ms. Lucie Charlebois, Minister for Rehabilitation, Youth Protection, Public Health and Healthy Living.

Second-hand smoke contains over 7,000 toxic substances and is particularly harmful to the health of babies and children because they breathe more quickly and their lungs and immune system are not yet completely developed. Frequent exposure to this smoke can cause or exacerbate respiratory problems (bronchitis, pneumonia, asthma), colds, and recurrent ear infections.

Many parents believe that smoking under the range hood, near an open window, in a closed room, or when children aren’t there limits second-hand smoke. Despite these good intentions, these actions are not enough to protect children. The only effective strategies are to make the home and car 100% smoke-free zones, and to smoke far from children when outdoors.

An opportunity to quit

According to the Léger survey (October 2016), 66% of parents who smoke reported that the Smoke-Free Family campaign encourages them to change their smoking behaviour: to reduce their tobacco consumption for 44% of them and to quit completely for 22%.

“Going outside or getting out of the car to smoke often helps reduce the number of cigarettes smoked, which can be a first step toward quitting. Even if the primary objective of our campaign is to protect children’s health by encouraging parents to smoke far away from them, we are happy that it also motivates some of them to break tobacco’s hold,” states Danièle Prévost, Senior Director, Clinical Setting, Communications and Health Content at Capsana. Indeed, Smoke-Free Family also promotes free cessation resources offered throughout the province, including the tobaccofreequebec.ca website and the I QUIT NOW helpline (1-866-527-7383).

Smoke-Free Family is an initiative of Capsana presented in collaboration with a network of public and private organizations, including Quebec’s Ministère de la Santé et des Services sociaux, the Quebec Directions régionales de santé publique, and the Jean Coutu Group. To find out more, visit smokefreefamily.ca.

Capsana is a social enterprise owned by the ÉPIC Foundation, which is associated with the Montreal Heart Institute, and the Fondation PSI. Its mission is to help individuals take an active role in their health. To find out more, visit capsana.ca.